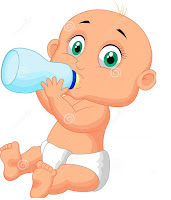 I have been getting baby development updates from a website and it has advised that if we haven't stopped giving our Dolly a bottle by 14 months, we really need to nip it in the bud sooner rather than later to protect her little pearly whites.  I have her down to two bottles a day. She has one in the mornings and one going to bed at night.  The bedtime one is my main concern. Usually we go through her bedtime routine and put her to bed where we give her a bottle in her bed and sing her songs or read her stories or just have a chat with her. Then once the bottle is finished she goes to sleep and we take it away (replacing it with a soother of course, but one addiction at a time please!)

I realise the bottle of milk isn't good for her to be having before going to bed without brushing her teeth. We have tried giving her a bottle and then putting her to bed, but lets just say that went down like a pooh sandwich and we paid dearly for our error that night. And I am weak. I caved in the next night and didn't persevere!

So the advice I am looking for is this. Should I start weaning her off the bottles? Is she too young to do that? Should I just leave her to her own devices and let her come off the bottle naturally? She doesn't use it during the day or walk around with it and is capable of drinking from water bottles, sippy cups and normal cups. All the stuff I have read seems to apply to babies who are using it as a crutch but I would really like to find out what other Mama's and Papa's have done!
Posted by Unknown at 08:50 No comments:

I am a guilt-ridden working Mama

I am half way through my third week back working.  It has been a quick two and half weeks and I am learning a lot.  It was time for me to go back to work.  I didn’t wake up on a Monday morning two and a half weeks ago filled with a sense of dread and impending Monday morning blues.  I bounced from my bed and waved a cheery bye bye to my family and then flounced off to the airport and jet-setted my way to London for the day.  I had umpteen cups of coffee uninterrupted, I had a whole magazine to read all to myself with no one to demand it from me, no one to listen out for or to keep one eye on.  Just me and my magazine and my coffee and for a split second, I felt like my pre-baby self.  I enjoyed my first day at work.  The only person that covered me in food that day was me, because I am, in nature, a messy eater!

But as I waited for my flight back home, and got a moment to really think about what was going on in my little house in Dublin, I got a little bit sad.  The desire to see my little Dolly’s smiling face was over whelming!  We had a skype date, and she was only delighted to see me. Waving and blowing kisses, and I sat in the airport and it made me want to cry. Which was silly, because I have left her much longer than a couple of hours in a day and not felt that way!

She stood up on her own for the first time on Monday.  She made her first independent stand, in a crèche, surrounded by wonderful girls that are genuinely delighted she did this.  But I wasn’t there.  I didn’t get to see her first attempt at this.  I missed it. And this is what its going to be like.  Big steps and little steps will be recounted to me by people that I pay to take care of her, while I am in work enjoying myself.  And this makes me feel so guilty.

I know that there are hundreds and thousands of parents that have children in childcare.  They are there by choice or necessity so I am not alone in the sadness of missing these things.  But since I started back to work, as much as I am enjoying it, I feel a lot of guilt a lot of the time.

On the other side of things, working has made me value the time I am with her.  Doing things with her, getting down and playing with her, bringing her to the park and the beach and just out on walks around the neighborhood are the top of the list of priorities now, not the laundry or the dinner or the cleanliness of the floors or any of that stuff that creeps in and distracts you.

I am beginning to realise that guilt and worry come with the stretch marks and war stories… Wouldn’t it be grand if we could split ourselves in two?

The thing about it is, and I’ve given this a lot of thought, even if I was in a position where I never had to worry about money and working was optional, I really think that I would choose working in some capacity.  And this hypothetical scenario makes me feel really really guilty.

I have never looked forward to finishing work as much in my life as I look forward to the end of the working day now.  I get excited little butterflies flapping around my tummy.  The traffic is too slow for me.  The lights are too red.  Every day I go to collect her, I race in and scoop her up and smoother her with kisses and cuddles and love and try to put out of my head the guilt and just remember that I am doing the best I can do for her.
Posted by Unknown at 11:29 No comments:

New start in an old place

Today marked the first day that I have worked in over a year and a half.  The time to leave my happy Mama bubble arrived, and with it brought a new opportunity to rejoin an old company that I loved to work for.  It was fate, destiny, sheer blessed luck that the opportunity arose at the same time that I had decided it was time to return to the working world.

I spent my final employment free weekend lounging about, enjoying my daughter, mildly hungover from a little bit too much prosseco and taking advantage of the much loved 'cat nap' that will no longer be available to me.  Do I have regrets about my  time off work?

Well, yes. I regret not maximising my cat napping potential, that's for sure.  It is with great sadness that I look back on all those wasted nap times... great sadness indeed. I wish I had have spent more time enjoying my daughter instead of cleaning... bahahaha, I can just hear my husbands incredulous scoffing ringing in my ears. Cleaning. I think I did heavy housework a grand total of about 6 times. Housework isn't my strong point. Clean bathrooms, clean kitchen, clean sheets, but don't pick up anything, move any furniture or look under anything either. You will most likely find tumbleweed and a family or two of spiders. I am a firm believer and regular promoter of the 'out of sight out of mind' cleaning policy. I do wish I had have done one of them toddler and parent things.  They would have been great. And even though I had over a year and a half to find one to participate, I never bothered. Mainly because they were always around Holly's nap time. Partly because I'm not great with new people. I like my old comfy well worn in people. New ones don't always fit so well.

What I don't regret are my mornings in bed watching my little one feeding herself. Imagining how picture perfect we must look, lying in my bed, lovingly looking at one another - until she has enough of the bottle and flings it at my head while trying to show me, rather aggressively, where my eye is. Ah, our morning eye pokes and attempted nasal amputations, I will miss them.

My Dolly is loving being in crèche. Thankfully, she has settled in so well and is a happy little monkey. Has even said the word crèche more than once. She's a genius, but I'm holding off on getting her tested because the other day I walked into the kitchen to find her sitting in front of her reflection on the fridge door with two fingers up her nose and her leaning forward to lick herself - that sort of dashed any notions I was starting to get!

My first day in my new old job was quiet successful. I flew to London - the wee jet setter that I am.  It's nothing as glamourous as you imagine the jet setting life to be, and frankly, I think I would hate it. But as a novelty, sure it was lovely sitting in the airport waiting on the flight this morning, reading a trashy mag and drinking tea while slowly removing my Mama hat, dusting the cobwebs and spiders of my worker hat and screwing that bad boy to me.  The novelty of travelling has already worn off, 12 hours since it began. Why? I am currently trapped in London City Airport breathing the same stale air since 5.30pm waiting on a flight that has been delayed till 8pm. And I moan about Dublin Bus???

Speaking of Dublin Bus, today I learned that it's not just the smellies on buses and trains that like to sit beside me and stink up my personal space. Oh no! No! They find me on aeroplanes too. I had a gentleman, and I am playing pretty fast and loose with the term gentleman here, sitting beside me and I am unsure as to whether there was a smell of pooh off him because he didn't change his underwear or because he had a big bowl of it for his breakfast and has never encountered a tooth brush and / or mouthwash. Either way, it made for a pretty rancid 90 minutes flight. I was gasping for some fresh air by the time I disembarked that particular flight.

On the plus side, London results in a lot of walking...my waste line could enjoy this travel!

And so ends my synopses of my first day back in taxable employment.  I have missed it. I have enjoyed it and I am glad that I am leaving my baby in very capable hands for something that I want to do.

Now, I think I might get myself a delayed flight glass of vino! 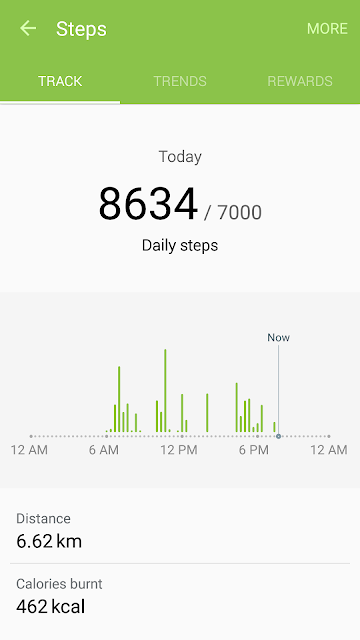