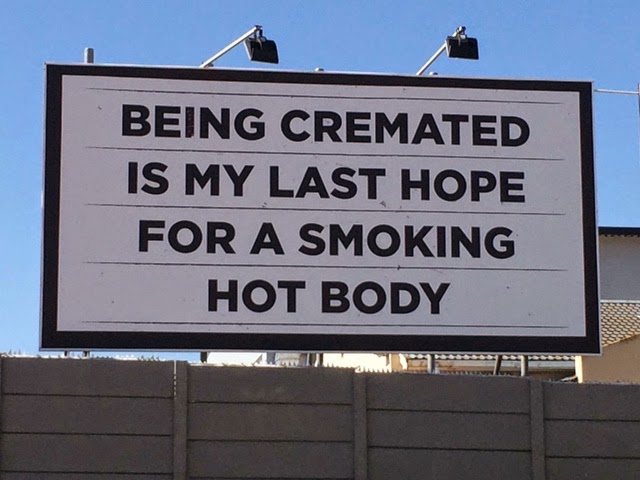 That's right. In 17 days time it will have been one whole year since I popped my little Dolly out and started this whole roller coaster they call motherhood. I can't believe how fast that time has gone, how much has changed and, alas, how much has not changed. Yep. In the twelve months less seventeen days since I gave birth I STILL have a stone to loose to get to my pre-pregnancy weight. And don't even get me started on getting back to my wedding day weight or my skinny but thought I was fat weight. I'm picking my battles to win the war!
So after all those thoughts happened, I found this; 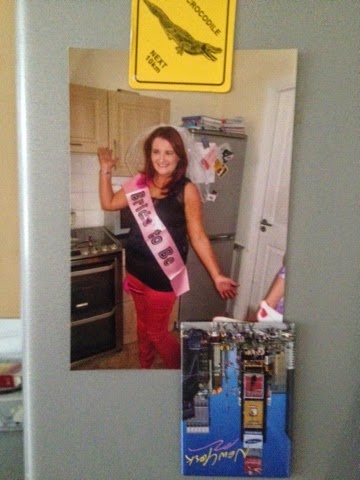 This is me on my hen day. This is now on my fridge as my thinspiration. Now, I realise that there are many that will look at that and think "hmmm, thinspiration? Really?" But when I look at that pic, it is of me the first time I ever looked in the mirror and actually liked what I saw looking back at me. That includes back in the old days when I was a size 12! I felt good, and fit and happy. I had worked so hard to get to that point and I was immensely proud of myself of sticking to guns and achieving what I had achieved.
I liked the feelings I was remembering looking at the picture.
So after that happened, this happened; 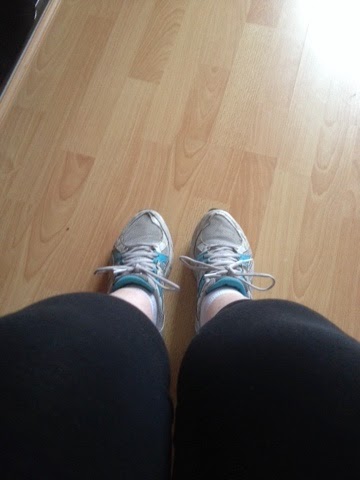 I went to my wardrobe and dug and dug and dug. Then I went to the spare room and checked there. Then under the stairs and eventually I found my runners. I brushed the spiders and their webs off them. Threw on a pair of leggings and a good supportive bra, flung the baby at Himself as he walked in the door and shouted over my shoulder "dinner will be late, I'm going for a run". And I did. 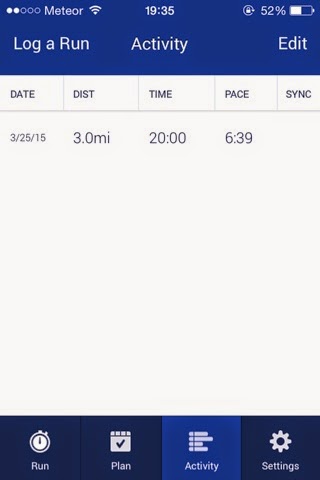 Now I realise that 4.8k (it sounds more impressive than 3 miles) is not a huge achievement in the grand scale of things, but I think it has helped me find my motivation again.
So I have 17 days to get back to my pre pregnancy weight. As always, my goals are realistic and achievable!!!
Posted by Unknown at 19:48 No comments: 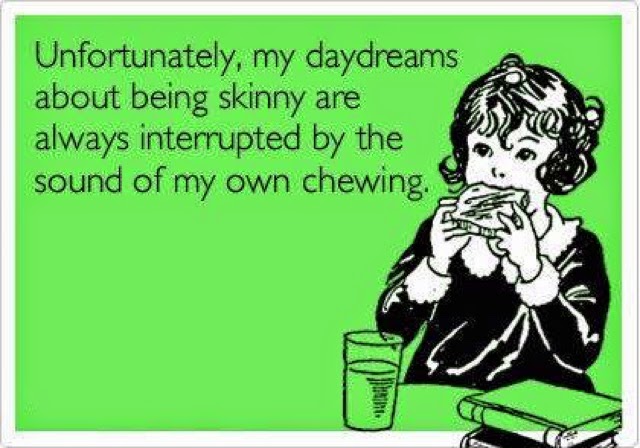 I had my first official Mother's Day on Sunday. I say official because last year my husband was very thoughtful and bought me flowers and a card from the Bump to wish me a happy Mother's Day. I was totes hormonal and, therefore, got totes emotes and cried my eyes out. But this year, I got woken with flowers and wine and cards and breakfast and cuddles on the outside. Which made a very welcome change from the foot that was lodged in my diaphragm last year, I can assure you of that! I even got a lie in this year! Last year, not so much...

It was a lovely day. It made me really think about how important it is to mind your Mammy and your Mammy-in-law too! This last year has made me so aware of what a tricky job it is to raise a tiny human and how much hard work my mother (and father) put in to make me into a presentable acceptable adult.  To be frank, I remember what a pain the backside I was, so I'm pretty lucky I didn't end up road kill and I pray every day that my daughter does not teach me a lesson my mother might like me to learn! We had a wonderful family dinner celebrating all the Mama's in my Dolly's life, me (her favourite), my own Mama, my Mama-in-Law and my Sister-in-Law all sat around enjoying wine (a little bit too much for me, if you get my drift) and having chats and laughs while the men minded the children and ensured that the wine glasses were nice and full.

Then we had Paddy's day.  This was a quiet one. No hangover (myself and the vino have fallen out again, we need a break from one another, as the old saying goes; absence makes the heart grow fonder), which was unusual for a week day Paddy's day. No chance of the pub with a little one in tow so we went to the park.  Not to knacker drink, but to actually go to the park and have a go of the swings.  Sadly, we were not the only parents to have this idea, what with the day that was in it, and there was a que for the swings, so I didn't get a go on them.  But Holly did, and she loved them! So swings are the way forward, and backward, and forward - you get it right?

All in all, it was a wonderful weekend. And "The Grand Stretch" in the evenings makes me very excited about the summer and the fun that is to come. Also makes me think about maybe, just maybe, making a trip to that park for an aul walk. Like a real proper walk. That might motivate me into becoming more of a weight looser than a weight watcher... But I think I'll make sure that the motivation is here to stay, rather than just passing through, before I get into making all those promises I never seem to keep!!

It is the eve of the eleventh month since Labour Day and my beautiful little fairy came rushing into the world. It is also the eve of an event which is almost as important, not quiet as important, but by jaysis it's up there! Tonight is the eve of the seventh night that my daughter has slept through the night, never waking once. This is the first time it has ever happened. She has always slept maybe two nights, possibly three, in a row, but never in all her life has she actually slept seven nights in a row.. I'm exhausted!
It's at least 18 months since I've had this much undisrupted sleep. It's like my brain and my body have gone into shock. They can't believe it. Even my bladder has given up on the 4am "I'm full" call that I've had to answer to every night since I found out I was pregnant all them months ago! You would think I would be bouncing off the walls like a new woman who's decided to avail of the relaxed ecstasy laws that have appeared in the country. But instead, I'm walking around like a zombie wondering if there's any more sleep to be had. I actually had a nap this morning. A nap! I didn't have a nap when the child was three weeks old and I was still feeling like someone had turned me inside out and cleaned me with a scour brush!
So, assuming my daughter doesn't fall at the last hurdle, I will be the happiest mammy in the world if she gives me 7 nights in a row! But, as I have said many times before, this too shall pass!!! No doubt she will punish my happiness with six weeks of insomnia.. But at least I can cling to the memory of seven nights on the trot!!!
Posted by Unknown at 22:49 No comments: 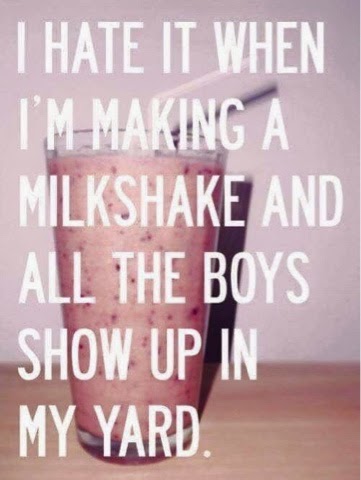 Days like today make me long for a Nanny

When I have a day like today which, to be fair, isn't often, I fantasise about winning the lotto so I can hire a full time nanny. I know, my lotto spending fantasies need some serious upgrading, but you didn't have to deal with what I dealt with today!
My beautiful, angel baby was like a feckin bear with a sore head all day. Why? She attempted to fight her morning nap. This nap is a sacred nap. It's the one that lets me get things done, like food for her, feckin food for me! I get things cleaned, me cleaned! I get a cup of tea that I can drink from start to finish. It's the only cup of tea that doesn't end up a cold greyish white liquid forgotten on the table. I even have The Nap Tea in a favourite mug.
So when she resisted the nap, I resisted her resistance. She was almost settled when the shrill clanging sound of my door bell slices through the silence of my house. This sound is swiftly followed by the sound of a ten month old that's just had the holy bejaysis frightened out of her.  The bloody postman was standing on the doorstep, slightly taken aback by my aggressive swinging open of the door and stern "for fecksake you woke the baby" look. The inconsiderate fecker was delivering an item I had ordered (que stern glare being replaced by "yay! A parcel" look)
Anyway, not that he gave a crap, but the little messer wouldn't go to sleep then. Not only for this mornings nap, but also wouldn't sleep for her afternoon nap either. All around me were the jobs I had planned on doing not getting done. The only thing I did manage to do was disconnect the bell so there will never be a repeat of this mornings shenanigans ever ever again!  I thought I was going to loose my mind. And to make it worse, her refusal to sleep in the afternoon was accompanied by a sudden and persistent need to be on me. Not beside me, not near me, but on me.  Happiness only  showed itself when she was sitting on my chest sticking her fingers in my eyes and mouth. Although, she did keep blowing me kisses which sort of kept me from putting her up on eBay....
So with all this lack of sleep, she should have been a bag of cats by the time Himself got home, right?  Wrong! I was never more happy to see that car come around the corner! We were standing at the window and I was jumping for joy! And all of a sudden, like a switch had been flipped, my grumpy, surly, whingey baby was replaced with this happy, smiling, giggling pet that was only delighted with life...
I have discovered that children, no matter what the age, can make you look a right little fibber! Himself was confused! Jaysis, he says, you look like crap! She looks in great form. To which I replied, go and... Well, you can put in whatever ending you want to that particular sentence.
Suffice to say I'm raging we don't have a stash of alcohol in the house. If we did, I'd be baloobous drunk right now trying to see the letters with one eye open!
Roll on Saturday night when I get to have a girlie night out!!!
Posted by Unknown at 22:15 No comments: