Yesterday wasn't the greatest day in the history of being Mama Mc (hoping that this nickname catches on!!).  My poor little Dolly has been sick as a small hospital with a dose of tonsilitis.  The poor divil has had it since Sunday and is on an antibiotic.  As a result she is doing an award winning impersonation of a sticking plaster... Her temperatures were through the roof! But at least we can give her medicine for her pain, there's not a pill in the land that could heal the ache in my heart when I left her at creche Tuesday morning. I lasted three hours in work and then went and collected her.  Thankfully my boss is incredibly understanding and allowed me to work from home for two days.

As I was saying, not the greatest day, but we got through it.  On Tuesday night I set myself a challenge of completing 8,000 steps.  When I realised that I wasn't actually going to get out of the house, I wondered how on earth I was going to achieve that trapped inside my little duplex. Old me (Me from Sunday 26 July 2015!) would have just said "Ah Feck it.  Lets sit down on the couch together and eat our weight in chocolate".  But new me (born Monday 27 July 2015) got creative... Today's weight loss assistants were these bad boys; my dumbells and the two steps out to my balcony. 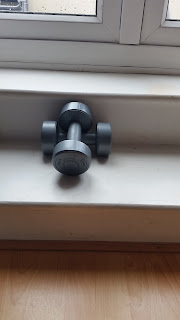 While they are not the heaviest weights in the world, they are a starting point.  The greatest amount of assistance came from the two steps.  I used these as the smallest stair master ever.  It's a good job we are not overlooked, because if we were I'm pretty sure my neighbors would think I had lost my mind bobbing up and down on them throughout the day.

I decided that to achieve my goal, I would spend a minimum of 10 to 15 minutes of every hour moving.  So I spent a lot of time going up and down these steps like a crazy person stuck on some sort of a loop! But it worked, and I more than achieved my goal  because I actually completed a grand total of 12,589 steps for the whole day.  Which was 112 minutes of activity! I didn't just go up and down these steps 12,589 times, I also got out for a little run. Imagine how boring a workout would be if you just went up and down a couple of steps that amount of times?

My sick little Dolly sat on the couch watching me and laughing her little head off at me, which was great cause at least she was laughing and not crying, or looking to be on my hip.  These steps are hard work, but harder with a 15 month old sat on your hip pulling your glasses off your face....

Operation Skinny Bitch (name courtesy of Himself), is underway...
Posted by Unknown at 11:50