I have come to the end of Week 1 of Operation Skinny Bitch. I am eagerly anticipating my weigh in today.  Eagerly? I hear you say... Well, I'll have you know that I have worked very hard this week.  I have moved more in the last seven days than I think I have in the last seven months.  I have swapped my chocolate and sweets for veggies and fruit and I'm feeling really good about it all.  My energy levels are higher than they have been in about two years. Not even a restless night from my Dolly can put a dint in them. I am zipping around the place, singing songs and feeling far less stressed out.  For the most part Himself is delighted with the change, but would really prefer that the "singing" stopped.  He has told me that the sound of my dulcet tones irritate him so much he wants to pull his ears off.  I can put all these changes down to a couple of things, obviously the happy hormones that are being released from all the moving and healthy eating, but I think it could be down to feeling like I am a little bit more in control.  My head is clear and positive, and I've even started to declutter my wardrobe and house. Himself couldn't believe it when he saw me doing actual housework.  He got such a shock that he had to take to the bed for two days (he also had a throat and kidney infection, but I definitely think it was the sight of me with the bleach and the marigolds that sent him over the edge).  To say I am on a mission is an understatement.

I started this week off with a goal to achieve 40,000 steps. I smashed that particular goal and actually managed to do a grand total of 62,478! I can promise you, I'm feeling every one of those steps in my legs and hips, but I am happy with myself.  I have become a little bit addicted to trying to out do myself every day.  This week I have even managed to run an entire 2.5km without having to stop once.  Granted, it's not a fast run, or a long distance and I won't be winning any marathons anytime soon, and when I do stop, my legs seize up and my lungs are on the verge of exploding, but I am sure it will get better / easier soon. This is what my week of moving looked like 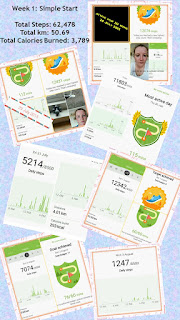 A lot of  time was spent thinking about and preparing food this week. I mean a lot of time and two finger tips were nearly donated to the cause.  But for once I wasn't obsessing about sugary foods, or the gourmet selection that is provided by McDonalds. Instead it was more about squeezing in the best possible foods to make me feel better. And it has worked. This is what some of my meals and snacks looked like this week: 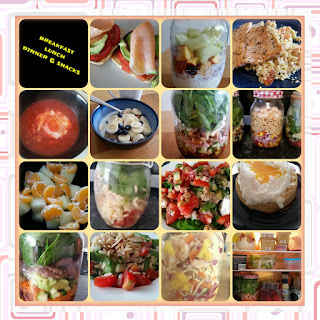 The reduction in refined sugar was very difficult this week. I was craving sugar like a crazy woman at the beginning of the week. After every meal I would wander around the vicinity searching for something to give me that hit I was needing. I was like a junkie! It gave me a headache once or twice. It is for this reason, that I actually decided to limit myself to two / three cups of tea in a day, instead of my usual 6 gallons of the stuff!! I love something nice with my tea. And this week made me realise that I was having something nice with every cup of tea I had! It was crazy. So after being so good and resisting the urge to give in to my cravings for six bags of haribo and three tonne of chocolate, I rewarded myself with a galaxy bar on Friday night with my evening cup of tea.  And it was delicious. I was in chocolate heaven.

I have even decided to count my alcohol points.  Something I never ever did! As it was the bank holiday and I had walked and run the legs off myself all week, I treated myself to a lovely bottle of Merlot - yes, that's right, bottle.. I see no point in just taking a glass out of the bottle. Might as well crack it open and finish it off, it could go off!

To sum up, this week has been great. My mood is brilliant, my sleep is makes me feel rested and I am feeling really positive.  What do I think my loss will be this week? Well, the dreamer in me says 6 stone, but realistically I would be happy with 1lb gone.  I don't actually mind what the scales says to me, I am feeling so good about myself, which was one of the objectives of going back to Weight Watchers. I rejoined last week because I am just tired of feeling crap about myself, inside and out! I just couldn't listen to the negative thoughts in my head anymore. I am not too worried about the scales.  But, if it told me that I had lost 7lb (see, keeping it real) I would probably have to go in for the wear and snog the digits off it!!