It's coming around to that time of the week again.  And what a week it's been! As I mentioned in a previous post, the day after weigh day this week was a tricky one. I just felt very disappointed that I wasn't seeing the results that I was feeling.  So I let myself have a moan day (one day? I hear my husband say, sure don't you do that every day!), and then I got up off my backside and got going again.  I challenged myself to 60,000 steps this week.  It was a challenge that I didn't think I was going rise to, given how enthusastically I had thrown myself into pity partying. But, despite this, I have so far managed to achieve a grand total of 54,108 steps and I still have one more day to go! 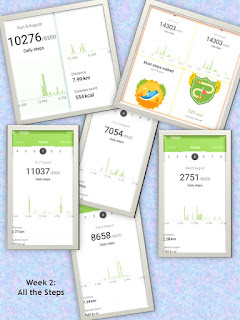 I am feeling so great with the changes I have made.  Last night was the first time in a very very long time that I went on a night out and felt good about myself and how I looked. I even managed to fit into my Hen Party outfit. Although, the look was not really fit for human consumption just yet.  But the jeans zipped, which was more than they did a couple of weeks ago. The last time I attempted to put them on they had a massive row with my hips and thighs.  It was an almighty battle, they were returned, bloodied and bruised, to the wardrobe to lick their wounds.  So that gave me a great big boost alright.

I had such a great night! But the end of it was a feckin minefield.  Have you any idea how many fast food places are open on Swords Main Street at 3.30am on a Sunday morning? Well? There's a million of them.  I trotted on past Mizzoni and ignored the calls of the cheesey fries, I clip clopped on past McDonalds and refused to listen to the Big Mac's begging me to eat them, I tottered on past Apache Pizza and declined to respond to the invitations from the chicken dippers to come in and have a dunk. It took all my willpower to trot, clip clopp and totter on past those tempting invitations.  But I did it, and I got home delighted with myself. Even in a decent enough state to remove my make up correctly and remember to bring some water to bed with me! Managed to remove my lenses AND put them in the bin instead of leaving them somewhere to dry out and become crusty and gross! All in all, it was a successful evening.

I slowly arose from my slumber this morning, gingerly moving my thumping head (I may have avoided the fast food, but I wasn't so virtuous with the aul Vino..) and, instead of having a dirty big cooked breakfast and heading down to the shops to stock up on jambons and wedges and crisps and chocolate and jellies, I had an lovely egg poached in a spicy tomato sauce for my breakfast (recipe on the Recipe page of my blog) and got up and did a work out for 45 minutes! Himself was in shock.  I was in shock. The usual turn of events after a night out consists of removal from horizontal position in bed, to horizontal position on couch barking orders to be brought food of all sorts and watching Harry Potter from start to finish.  But not today! Oh no sir!

So with all that in mind I am expecting to wake up tomorrow morning a size 8! Here's hoping the scales recognises all my work, because if it doesn't, I will have to set it on fire!!!

Although in all seriousness, even if the scales doesn't want to recognise my hard work, I can feel it in myself.  I'm not as tired as I usually am, I am in a constant good mood (although Himself might have something to say on that subject!), my stress levels are decreasing daily and I am starting to notice a big change in my attitude towards myself.  The negative thoughts are not as frequent and I am much kinder to myself this week.  Which was one of my main goals for the week.

Wish me luck tomorrow morning people!!!
Posted by Unknown at 21:57